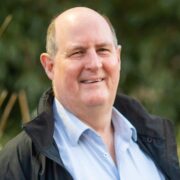 Dr Jeff Gosper became the Associate Dean (Programs and Quality) in January 2021 after spending the 5 months prior focused on building new IT courses for APIC. Dr Gosper has had a number of roles in academia, research, and as an IT professional.

Dr Jeff Gosper studied at Sydney University where he gained his Bachelor of Science (Hons) for which he was awarded the University Medal. He continued studying at Sydney University and completed his PhD. Dr Gosper was initially employed as a Research Scientist within Australia’s premier research organization, the CSIRO. After a few years he moved to England to take up an appointment as a lecturer at Brunel University. In this position he developed an interest in computer programming and published a number of papers and computer applications that allowed users to explore complex dynamic phenomena (effectively creating ‘4D movies’).

Dr Gosper furthered his studies by undertaking an MSc in Advanced Computing at Kings College London. He then joined Tripos Inc. (a NASDAQ listed company) as a Senior Software Consultant and work with an international team creating web-based informatics solutions for a range of large pharmaceutical companies. After 12 years overseas Dr Gosper returned to Australia to become a Research Engineer and Consultant within the CSIRO’s Division of the Maths and Information Sciences. He then returned to the education field by joining KvB Institute of Technology (which became Raffles-KvB) initially as Head of the School of Information and Communication Technologies, then becoming Dean. Within this role he was responsible for establishing offshore course delivery sites in Bangkok, Mumbai, Shanghai and Singapore.

Dr Gosper then joined Study Group Australia, as Deputy Director of the Darlinghurst Campus, cover roles including Director Martin College Sydney, and IT Course Coordinator for the CSU Study Centres. He was also appointed as an Adjunct Senior Lecturer with Charles Sturt University (CSU). Within a couple of years he was appointed as the Academic Director at the CSU Study Centre Sydney where he is responsible for the academic delivery environment within the Study Centre.