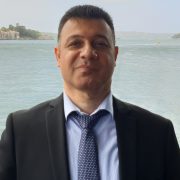 Oday Al-Jerew is the BBIS course coordinator and lecturer. He has over 12 years of teaching experience in the field of Information Technology, Software Science and Networking. He Joined APIC as a full-time lecturer in February 2017. He is also an active researcher in the area of networking and telecommunication, ad hoc networks, sensor networks and network security.

Oday completed his bachelor’s degree in control and computer engineering from the University of Technology-Iraq in 1997, he completed his Master of Computer Engineering from the University of Technology in 2000. In 2012, he completed his PhD in the area of wireless sensor networks from the school of engineering and computer science at the Australian National University (ANU).  Prior joining APIC, Oday worked as a lecturer and assistant head of the Computing Department at the Middle East College (MEC)-Oman. He also worked as sessional lecturer at La Trobe university, Victoria University, University of Western Sydney, Melbourne Institute of Technology, and University of Canberra teaching ICT subjects. Oday was also full-time lecturer at the department of Information Technology at the University of Technology in Iraq. He was also involved in many industrial projects and gains extensive industrial experience during his worked at several industrial companies. He worked as software and systems developer at the AusRobot company to develop embedded programs for mobile robots. In addition, he designed and developed microcomputer-based systems during he worked at the General Electrical Company in Iraq. He also holds technical certifications in computer networking from Cisco Networking Academy and Microsoft.

Oday has taught many postgraduate and undergraduate subjects in different universities and colleges in Australia and overseas and successfully supervised several research students. He has published journal articles and conference papers and has been member in numerous conferences.